Trust your instincts. Know yourself.

These are simple things to tell yourself to do, but often the execution can be quite hard.

Each new day has brought about better and better feelings in the legs, which has spurred me on to push myself that bit more. I’ve been consistent in my rides, putting in quality efforts each workout. One session especially killed me;  a devilish 1 hour workout which included several big-gear power and ramp efforts. I was on a roll, but with each passing workout I was feeling that bit more tired. It wasn’t an exhaustion, but that snap (or spark, kick) just wasn’t there in the legs.

The signs were there over the weekend, but it was Tuesday’s ride that made me realize how much I was affected. I rolled out for ‘fresh‘ from my rest day on Monday. I had a plan, a simple one, attack the Molenberg climb KOM and try to crush it. This time I would make sure my body was warmed up, my legs prepped and I was mentally ready.

I hit the climb with good speed, kept a nice line, didn’t have to much wheel bounce and felt good about my effort overall, but something was missing. It wasn’t a full loss of power, but just a slight, but noticeable difference, in my ability to tick the legs over. I continued on and rode over a few other climbs and willed myself out of sleeving the planned three hours for a shorter ride. I, as they say, HTFU’ed and got on with the ride as planned. I was glad I did, as I began to feel better as the kilometers ticked over.

Once home I got off the bike and went upstairs to stretch. It’s an activity I suggest EVERYONE take part in. Use these times to reflect on your ride, to listen and communicated with your body and take an assessment of where you are after each workout. That day each deep stretch brought on a twinge of pain. A small manipulation on the quad felt super tender. It was then I knew it, I was overdoing it with my training and rides.

While I don’t feel old, I do consider myself a rider of experience. It’s through many years (and MANY, MANY mistakes) I have been able to learn to read my body, to know it nuances and know when enough is enough. There are riders who you can punish and they will never break. There are riders who need to be pushed, willed and sometimes forced to give full effort. I however, am not one of those riders. I will happily will myself into a complete stupor of pain, push myself till I can’t go a bit more and then keep going. Earlier in my youth I would have ignored these signs I was feeling, told myself to “Man Up” … HTFU … Winners never quit, quitters never win and the like. Now I chose the right decision, I backed off just a bit, adapted my weeks training and kept going.

Wednesday morning a short and easy(ish) trainer rider awaited me. Coupled with a lot of stretching and a long warm bath the day before and I was beginning to feel better. I then moved my Thursday training to the afternoon, thereby extending my recovery even further. The results, well they speak for themselves.

Thursday I started to roll along and the legs felt good … very good. Not one to spoil the day (and some fresh and ready to rock legs) I made a plan to attack the Holleweg cobbles again. I mapped out a route in my head and decided to use the Kappelberg (which finishes just at the start of the Holleweg) as my warm up. I started the climb steady, felt really good after 100 meters and then said to myself; “Screw it!”, and I gunned it up the climb. The wind was in my favor I will say, but I did feel good and it helped boost my confidence for the Holleweg.

After a brief recovery at the top of the Kappelberg I went after the Holleweg. I rolled steadily onto the cobbles and immediately found myself in my second to last cog. The start of the cobbles are terrible, with a fair bit of wavy undulation, lots of misaligned cobbles and a light coating of dew not quite burned off from the morning rains. At least three times in the first kilometer I had to will myself not to slow down, not out to a physical need, but because going as fast as I was on the cobbles was getting a bit scary. At 1 kilometer the cobbles started to smooth out, the grade goes slightly negative and combined with the knowledge that the cobbles were almost over I gave it one final push. At the end I knew it was going to be a good time. It felt so much faster than before and I was almost giddy to get home and see how I did. 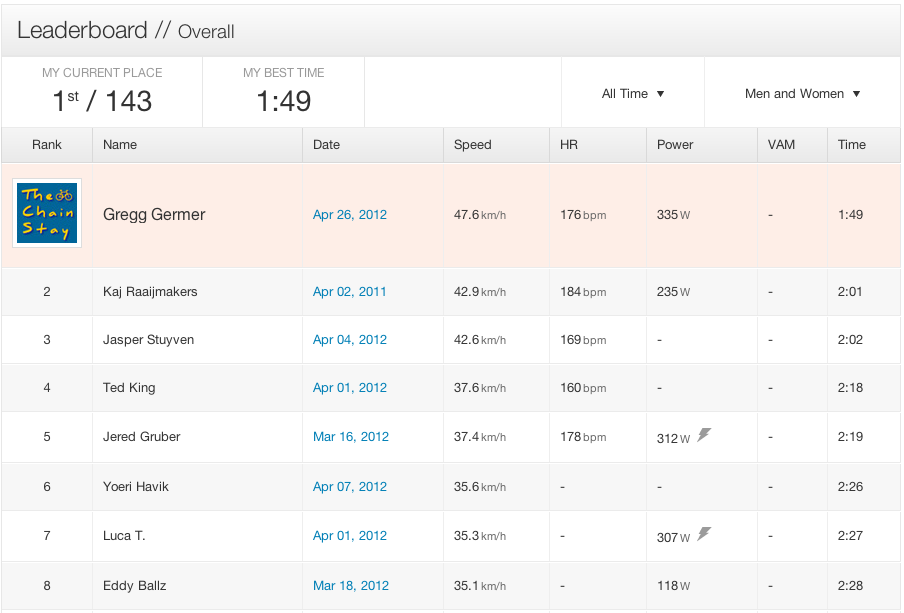 Sure enough I was right. After a quick upload to Strava I saw myself as the new KOM of the Holleweg, plus a bonus of 2nd on the Kappelberg … not a bad day. But that isn’t to say it was easy. The effort hurt me, so much so I torqued my back from the effort and it took some serious stretching and work to get it back into a right state. But it was worth it. It was days like today that I ride a bike. Days where you can feel the joy of everything coming together and you are ON IT. And for me, what better way to treat my new KOM than to break into my stash of Westvleteren 8’s and crack one open. It’s my first beer in over 2 weeks, but it was so worth it .

So if your a young athlete out there (or even an “experienced” one like myself), learn to communicate honestly with your body and yourself. The benefits will help accelerate your development by years.

One thought on “Project Meatsuit – Week 6”