Project Meatsuit is back … it was a busy two weeks for us over here at The ChainStay with our Spring Classics bookings (a full house!) and our day trips of both the Tour of Flanders and Paris-Roubaix. Due to the crazy nature of these two weeks I made a conscious choice to put a lot of my diet and training focus to the side and just get the job at hand done. My goal was simply to maintain my fitness, which shouldn’t be that hard with leading rides, etc. and to maintain my weight throughout the Spring Classics. 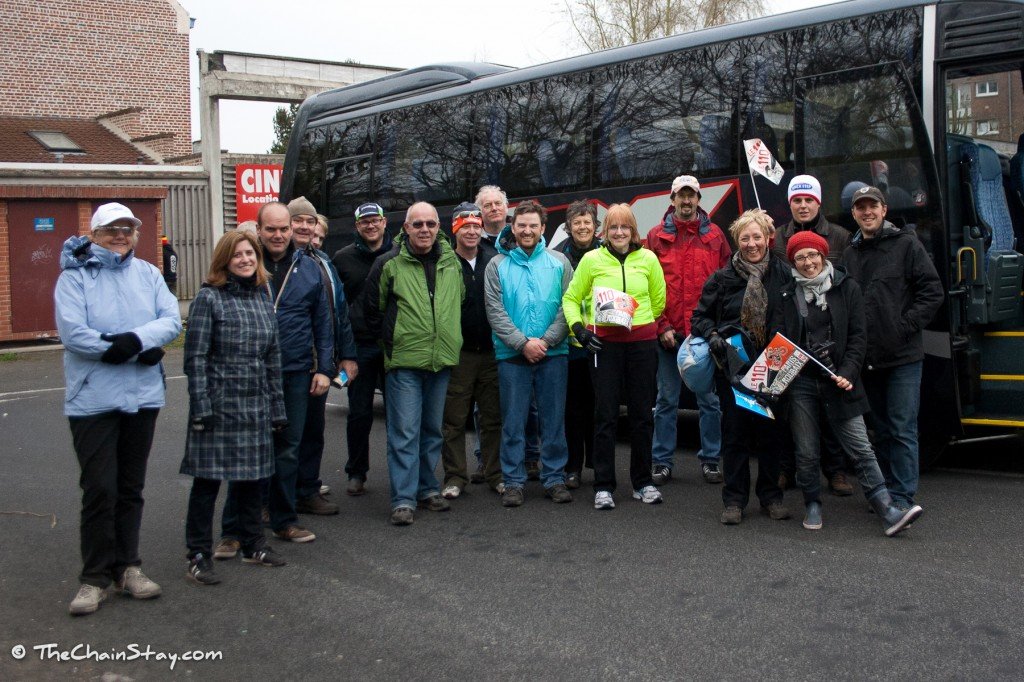 As it turned out my plans decided to run a completely different course than I wanted. Instead of maintaining my weight, I lost an amazing 4kg’s (8.8 lbs) at one point, but lost some fitness at the same time. I did this through the amazing E.Coli diet! On Monday and Tuesday our rides featured some of very remote and beautiful country side of Belgium, but at the same time, the freshness of the “Ode de Flanders” stench of the manure trucks. They were in full force during both rides and somewhere along the line I caught something on the ride. 10 years in Belgium and never a problem with the trucks, but smack-dab in the middle of our busiest week of work in the year I got hit, and hit HARD.

Saying the weight loss was “easy” doesn’t do the three days of hell I went through justice. In fact that was the hardest way I have ever lost weight. Then to add to it I settled at 78.5 kilos, so I gained back almost half of the weight I lost (which I knew was mostly water). But three days of little-to-no appetite did reduce my weight. On the other hand, I lost a bit of fitness from the recovery from those days and simply recovering from the long (but exciting) Spring Classics week. 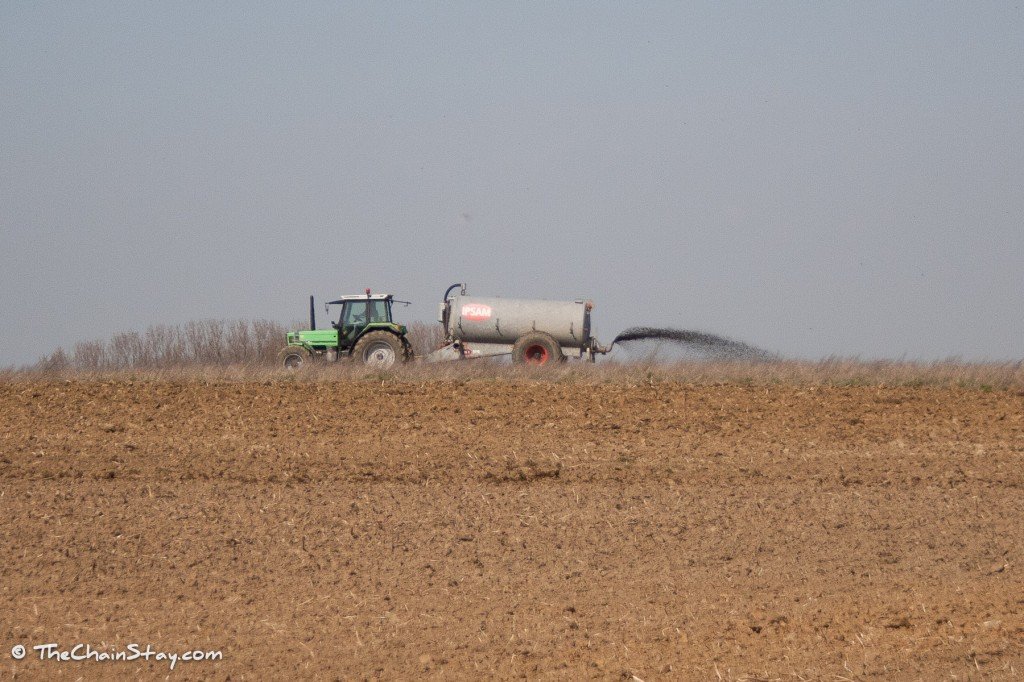 Once things got back to normal I decided to get back into the swing of training and was finally able to put in some decent days of training. Each ride is becoming more and more enjoyable as the fitness grows. I’m finally at the point where long rides aren’t the dredge of the day, but an effort where I can go hard and recover to a reasonable level the next day.

The biggest motivation I’ve had lately is a small, but growing, addiction to Strava. For those of you who don’t know what it is … well it’s Facebook meets crack for cyclists. A website that allows you to upload GPS rides and then share (and compare) those rides with your friends. There are fun little things called “Strava Segments” where you can compare your times against others up/along any section of road (like the Koppenberg or other monumental bergs). In fact I can fully blame Jered Gruber for getting me addicted to Strava. While he was here at The ChainStay he amassed something like 50+ Strava KOM segments! Of which I plan to take them all, thereby forcing him to come back to Belgium! You gotta create demand in business sometimes!

One section I have been eyeing is the Molenberg ever since I threw down with Jered in March and was able to snake past him on the first half of the climb, but then blew up before the end. So I set out earlier in the week to try and take the KOM from Jered. My first attempt on the climb didn’t go so well as I lost a bottle about 50 meters into the effort, so I stopped and regrouped. I pushed over the first section of very separated cobbles well, maintained a good contact with the rear wheel and kept a steady effort all the way to the end. I pushed my heart rate all the way to 184bpm (one of the highest I’ve seen in a while). I finished feeling wrecked and a bit queasy.

I rolled along after the climb and my heart rate would just not recover. Just rolling along I was hurting and I could tell I dug deep into the pain cave on the effort. Then, about 4k after the climb, I just started to shut down, felt very sick and had to stop. It was then I threw up everything I had in me. I pushed my body just a bit to much, but with such an effort I was looking forward to seeing my time on the climb. After five minutes of easy riding I started to feel better and kept on riding along for the rest of the ride which included the Holleweg section and a quick trip up the Koppenberg. The Holleweg went well and I rolled along nicely with a brisk tailwind, pushing a large gear and using my cobbles experience to ride smoothly.

Once home I quickly went to download my ride and check my time on the Molenberg. I looked down at the segment page and saw it, 7th place, for the Molenberg! What, only 2 seconds faster than my effort from a month before! I was a little disappointed, but then I looked below and saw that I had the KOM on the Holleweg cobbles. Not a bad consolation for the disappointment of coming up short on the Molenberg. Such is the draw of Strava, it taps into the part of us that wants; almost needs, to compare ourselves to others (and our past performances). It allows your to “ride” against your friends, strangers and even pros and see where you rank in the world of Strava. 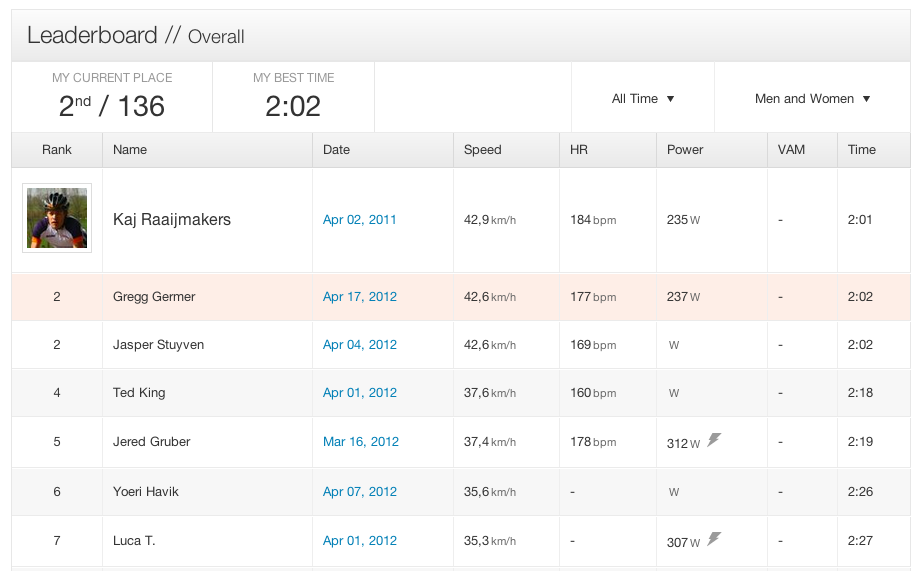 Unfortunately I am no longer the KOM of the Holleweg as someone else has uploaded their ride of the Tour of Flanders sportif and beat out my time by one second! Still, this is why I really like Strava, it has given me that extra motivation to go and chase down that KOM and get the fitness to achieve the effort. Strava brings in an element of “virtual competition” to what could end up being a low-motivation ride or week and keeps you that extra bit motivated. With literally hundreds of awesome power climbs and cobble sections around The ChainStay I have lots of KOM’s to chase down (and steal from one Jered Gruber!)

So things are right on track for fitness and with a bit more fitness I’m going to be bringing in some racing into the fold this summer. I’ve taken out a license this year and will be doing my first kermis race in a month in Lierde. It will be the first real test of where my fitness is and a good comparison of the current Gregg verses the former Pro-level Gregg.