We are only 81 days until the start of the UCI Cyclocross season (but that doesn’t mean cyclocross has stopped in the summer) and the UCI has made a few modifications to the rules for this coming season. If there was one word to describe the changes it would be “Progression”.

Let’s take a look at some of important rule changes:

While this doesn’t explicitly have the creation of a “Women’s Youth” race (with the exception of continental championships) it does allow for a natural progression of the category to form over time. It has been a goal of Helen Wyman in her roll in the CX Commission Panel.

Potential for wider use of Women U23 category in CX. Cross Commission working hard for change #cyclocross #progress pic.twitter.com/lfWbQl8IdF

A bit of re-wording to rules that govern where the top racers in the UCI rankings can race.

5.1.002 A rider ranked in the top 50 of the UCI cyclo-cross classification may not take part in
national events in a country other than the federation of his nationality according to the
UCI regulations.
(article introduced on 1.09.04; text modified on 16.06.14).

While this will certainly keep Sven from racing a local CX race in the US, it does have some implications for guys who race in the US, but aren’t from there. The main name that comes to mind is Ben Berden (ranked 37th) and possibly Ian Field (ranked 30th) will only be allowed to do UCI races while in the US.

5.1.038 A rider may only take the pit lane to change his bicycle, wheel(s) or for other mechanical assistance.

After the UCI ruled that you were required to make a bike change when using the pit lane last year it was pointed out by several people that not everyone has a spare bike and that it excluded people who don’t have this option. It appears the new change highlights this concern and gives people more levity when needing to use the pit lane. The rule still prevents you from taking a sneaky line through the pits with just a foot down and no bike change.

5.1.048 During women’s events the duration must be a minimum of 40 minutes but not exceed 50 minutes.

This rule certainly has come about from a few events that decidedly rank their races on the shorter side of 40 minutes last year (I’m looking at you Namur and various Superprestige races). Several women in the peloton made comment to this fact and it appears the shortened races are being tackled by this rule change. For me it also paves the way for a lengthening of the women’s races to a full 50 minutes in the future. It’s something people have been calling for, but a year or two with races touching the 50 minute mark will serve well to transition people to the longer distance. 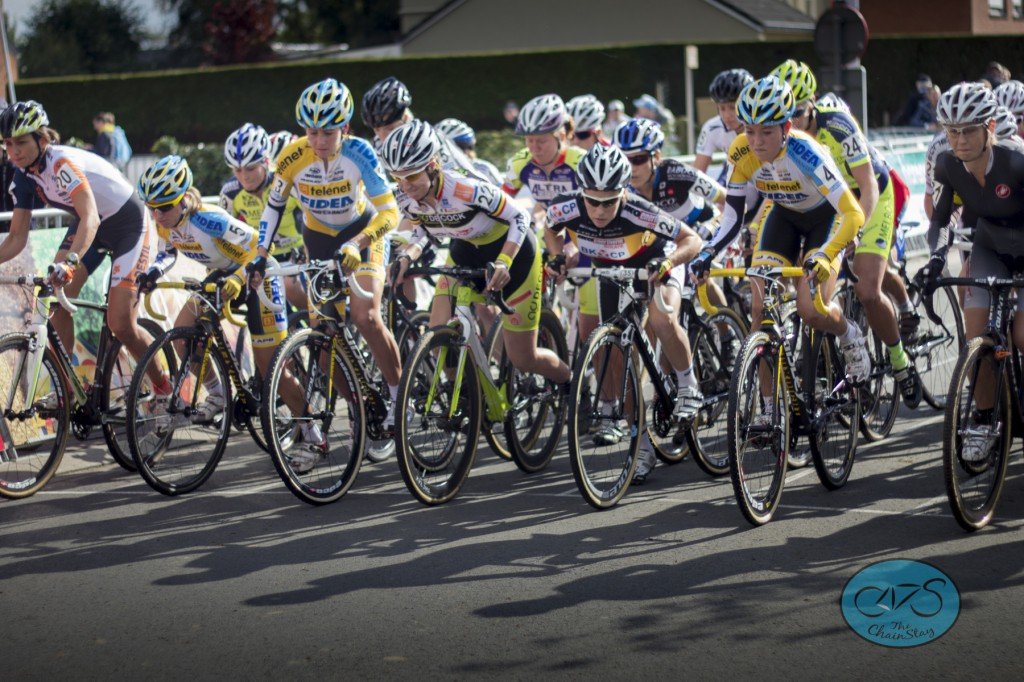 This might be my favorite rule of the year. No longer will the women’s field (or any field for that matter) be at the whim of a promoters preference. It seemed many who disliked being required to host a women’s race for a C1 event decided it was often appropriate to schedule the women’s race first, often at 10am. Sometimes this early start time meant officials were not ready to register riders until shortly before the event was due to start. For many who double up their duties helping both genders (this author included) this comes as a welcome change.

In any case, during world championships and continental championships every rider
has to wear the jersey of the national team.
(article introduced on 16.06.14)

Some new fashion requirements by the UCI if you are so lucky as to wearing a jersey of distinction. This will help riders like Helen Wyman from having to choose between her national champions jersey and her continental championships jersey during a race. The biggest conflict I can see coming from this rule is a rider like Jeremy Powers taking the lead in a particular race series and then being required to wear the leaders jersey, as per rule 2, of the priority scale. But on the other hand it does mean a national champion is allowed to wear their jersey in a world cup race, but it’s unclear how this will affect the U23 field. Will ones trade team national championship jersey be allowed in the race over the official national team uniform? 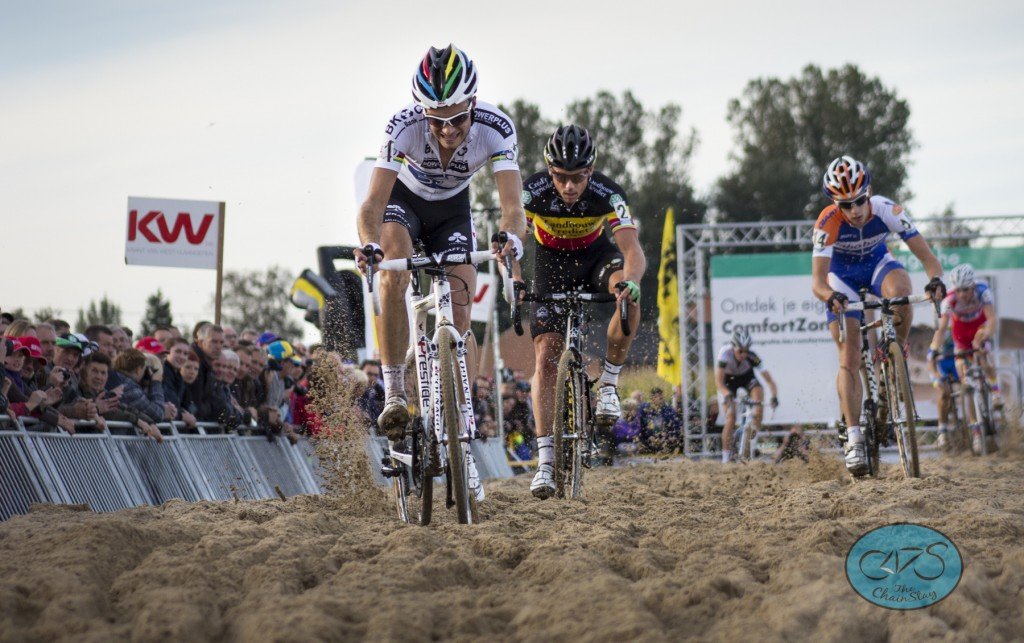 5.3.006 In UCI cyclo-cross world cup events for men elite and women riders ranked in the top
50 of the last UCI cyclo-cross classification published before the opening date for
entries are pre-qualified. Pre-qualified riders are eligible for selection at the discretion
of the federation of their nationality. Federations with less than 8 riders in top 50 can
expand their selection to a total of 8 entries. Unused pre-qualifier places are not
replaceable.

I like to call this “the Belgian Domination Rule“. Previously a team for the World Cups was limited to just 8 riders. For most countries this isn’t a problem, but for Belgian rider politics and an abundance of quality riders has left many guys off the World Cup team (and the very deep points it provides) at home. This was one of the main reasons Jan Denuwelaere cited when he decided to retire from cyclocross despite beating some of the top riders in the country that year. (He has come out of retirement to return this year). The biggest winner of this rule are riders like Ben Berden who will be auto-selected for the World Cups if he chooses to go. There are even a few guys from the Dutch side who will now be fighting for that top-50 ranking to insure they are auto-selected.

What does this mean? I think you are going to see more Belgians going to non-GVA and Superprestige races and going after lucrative points in the smaller races to gain a top-50 position. Some of the guys like Sven Vanthourenhout, Joeri Adams, Dieter Vanthourenhout and Quinten Hermans all could gain enough points in some cherry picked races at the start of the year to put themselves into the top 50 to make the cut. There is potential after the first round or two of the World Cup to see 15+ Belgians take to the starting grid! It also means that guys who use to make the top 50 in most of the UCI World Cups are going to be missing out on the €300 euros prize money they use to make. It’s going to hurt the pocket book of a some of the on the fence riders where that money makes a difference. 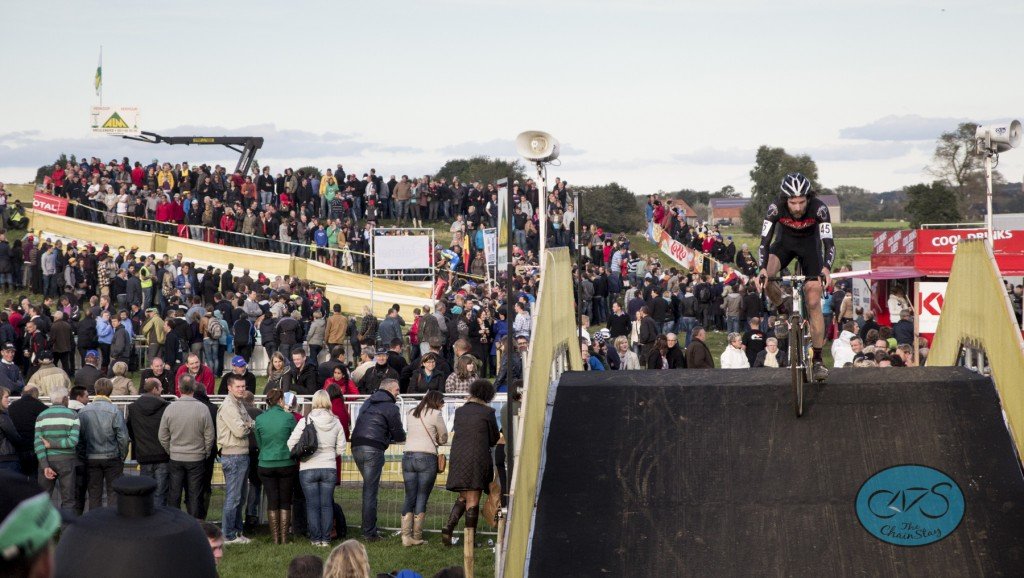 5.4.002 The riders taking part in the masters world championships represent their country, but
are permitted to use the equipment of their choice.

5.4.003 All details specifically relating to the masters world championship must be obtained
from the organiser or from the UCI website.

5.4.004 The championships are usually organized in 5 year age groups: 30-34, 35-39, 40-44,
etc. Age groups will be combined when less than 6 riders enter an age group. In case
of combined age groups titles for the respective 5 years age groups will be awarded
(even when only 1 rider is entered).

A whole new section with some rules to govern the Masters World Championships. It is exciting to see the UCI finally making a clear and defined way to handle field sizes that can sometimes be quite small at the top of the age brackets. Especially given the way some organizers tended to make up the rules as to awards which varied from year to year. Now if we can only get a clear idea of when and where the UCI Masters World Championships will be each year more than a few months in advance (plus a decent website to help give the guidance of the racers who want to join). While the UCI is at it, try to formalize a date in the calendar that works well for everyone and doesn’t preclude guys from choosing between Worlds and Nationals as it happened this year for many US riders.

Overall there are quite a few progressive changes. All steps in the right direction and will help bring some better development to the sport of cyclocross. The dominance of Belgium on the cyclocross circuit (both in terms of riders and races) is still holding firm, many new and exciting events are developing outside of Belgium and growing each year. While the situation Belgium’s dominance of cyclocross is both a great thing and a curse, it’s a topic for another article.

I for one am looking forward to the 2014/15 cyclocross season!