My trip to The ChainStay in Oudenaarde is already a trip that I will never forget, and I have only been here for a few days. After a tedious plane ride, some waiting in the Brussels airport, and a short drive to Oost Vlaanderen, I got settled into my new home for the next three weeks. With my bags unpacked and my bike built up, we went on a short ride. Lucky for us Juniors (Sawyer, Jay, Andrew, Skyler and I), two of the Nieuwelingen (Urko ‘The American Boy’ and Mateo) are still staying at the house, and since they have been here racing for a few weeks already, they have a sense of where everything is. 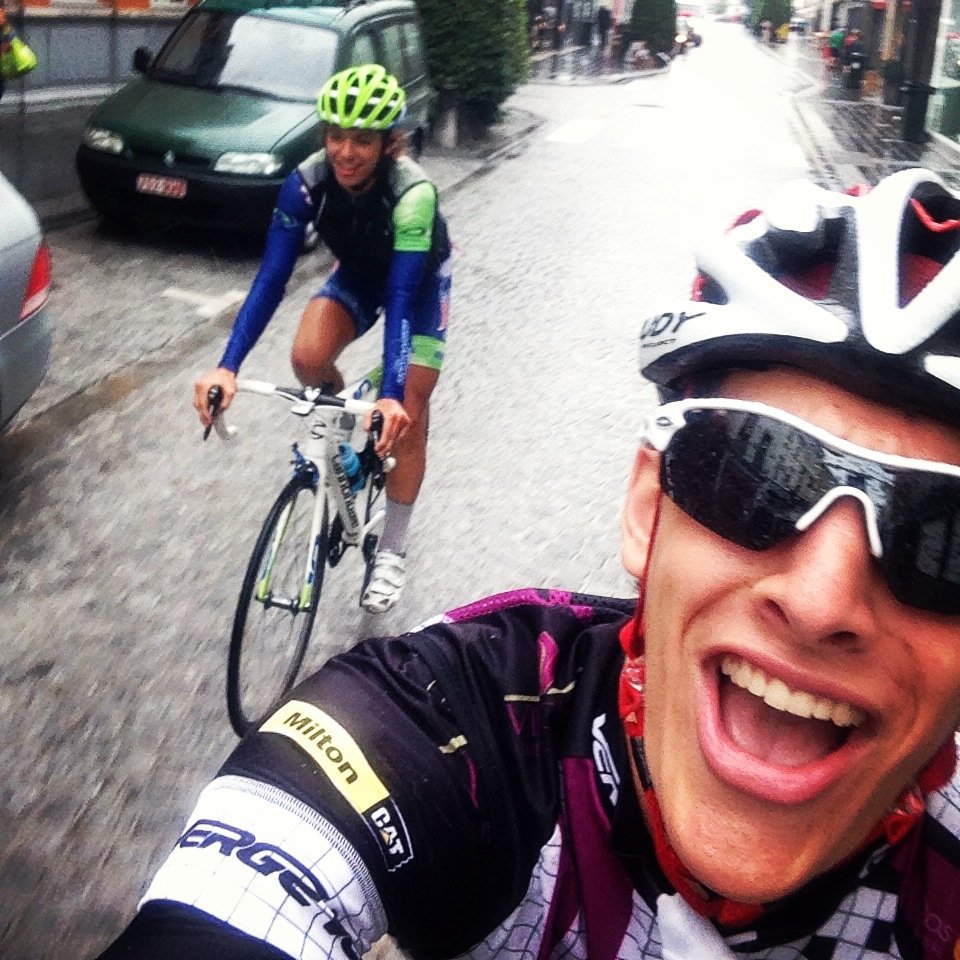 Urko and Mateo took us on some back roads and bike paths, and in no time we were at the base of the Koppenberg, arguably the most famous climb of the Tour of Flanders. This is one of the many things that makes Oudenaarde a great city to live in. Several of the famous cobbled climbs are within a short ride. After the ride, which was quite cold and wet, I had to fight to keep myself awake until 9 o’clock, to keep my sleep schedule from getting messed up too bad.

After sleeping for twelve hours to make up for my minimal sleep on the plane the night before, I made some breakfast, and packed my bag for my first race of the trip, in Kooigem. It was a 96 kilometer race, consisting of twelve laps, with a short and gradual climb each lap. It started out very fast, and I stayed no farther than twenty riders back for the whole race. A few riders rolled off the front, and then a few more groups rolled away before I realized that the race was up the road. I attacked through a very technical section right after the finish line and once I started to the climb, a group of three was bridging to me. For that whole lap, we rode a pretty solid Team Time Trial until we caught the next group.

A group of six had gotten away from that group before I made contact. We attacked each other for a few laps trying to bridge to the leaders, and managed to take our group down to eight. With one lap to go our group realized that we were not going to catch the leaders, and we all just rolled through the last lap. With about 1.5 kilometers to the finish, everybody in our group put on the brakes and started looking at each other. Shortly after the cat and mouse tactics began, I attacked, and everyone looked at each other to chase, and I got a gap. I drilled it to the finish and ended up in 7th place.

I was very pleased with that result, given the jet lag and the fact that I haven’t adapted to the time change yet. We drove the short distance back to Oudenaarde, and I thought I was going to sleep like a baby. I was terribly wrong; I woke up during the night and stayed awake for four hours in the middle of the night. After two more days, I think that I have finally completely adapted to living here in Belgium. I have two races coming up tomorrow and Sunday (August 3rd and 4th) in Denderwindeke and Zingem.

I would like to send out a major “Thank You” to my parents, the rest of my family, C.F. Racing, Peak to Peak Training Systems, Gregg Germer, Tim Redus, and everyone else who made all of this possible.