My preparations for a 24 hour ride weren’t what I would call ideal, but they weren’t severely lacking either. I’d ridden the climb in succession over extended amounts of time in the weeks leading up to the ride. Each ride, ranging from 1 hour 30 minutes up to 2 hours 30 minutes, gave me a pretty accurate idea of what I was about to undertake. Each lap to complete the climb would be around 7:30 to 8:30 long, with the Koppenberg taking up around 3:30 to 4:00 of that time. Given that time frame I was looking at around 11 accents an hour, 12 when I was rocking it. 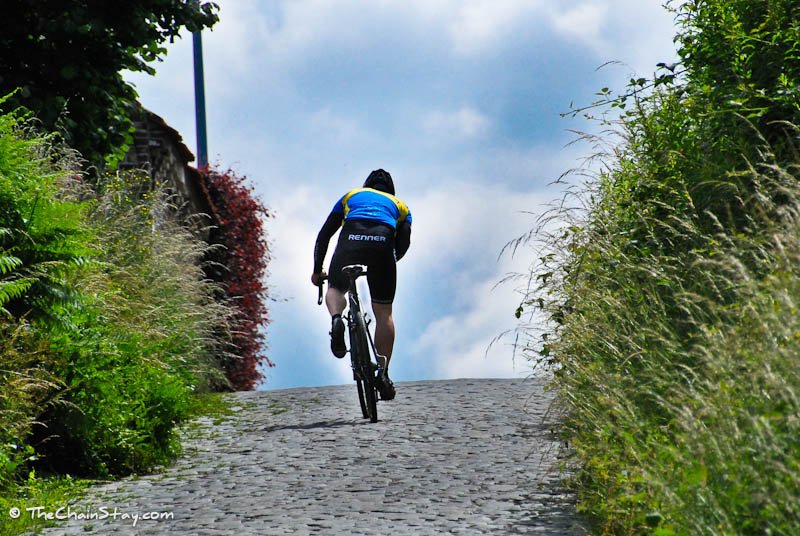 The pace I was looking to ride was far off my PR of 2:20, but I knew the key to the mammoth undertaking would be consistency. I was able to knock off 28 laps in those first four hours with even 3:30 to 3:50 minute laps, just as I had planned. I was feeling good, drinking sports drink, but also protein shakes, to keep my water and calories up and feeling confident for the following laps to come. My initial goal of 125 times was looking good.

My 5th hour on the berg saw another 7 climbs, keeping up with the initial pace, but it was going into the 6th hour that I started to feel the effects of the preceding climbs. My body was slowly losing strength … each contraction of the muscles began to hurt just that bit more. It was also the same time I began to feel some unplanned surprises. I was prepared for my legs to hurt, but the biggest factor was starting to become my fingers. I was having to ride the brakes each time I descended the field to keep my speed reasonable. Lap after lap of pulling on the brakes, combined with gripping the bars to control over the cobbles, left my knuckles swollen and aching. 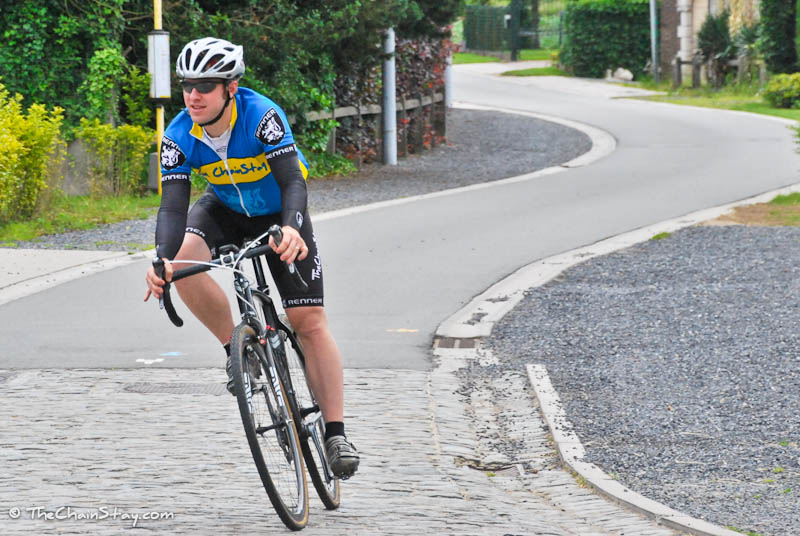 The end result of the constant wearing down on my body was leaving my motivation waning, and physically I was only able to get in 4 laps in the 6th hour. The 7th hour saw a resurgence after a small, but extended, break and a return to a solid 7 laps for the hour. It was at this point I took my first big break for some real food, a change of clothes and a bit of recoup. After my break I’d completed 50 laps and just 8 hours into the ride. Still confident I set out with 2/3rds of my 24 hours to go and just 75 laps to my goal.

As I returned to the Koppenberg my body felt the toll of the previous times up the cobbled climb. I proceeded to try my best, but of all the times I climbed after dinner I could only manage one time under 4:00, a sure sign the state my body was in. In addition, I was begining to only be able to get three to four climbs out of my legs before I was beginning to hurt too much. 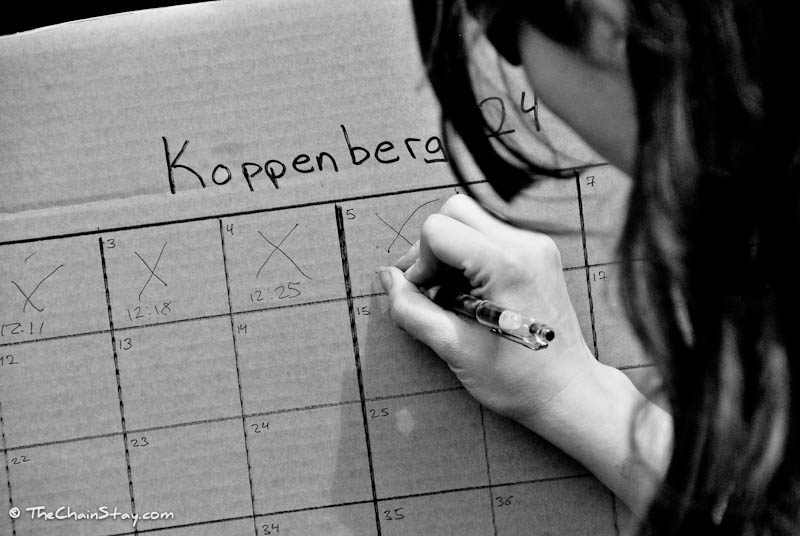 Unlike a paved climb, the Koppenberg is cobbled, but more over, there is no easy way to go up the climb. It’s a feast or famine sort of climb. When you are strong, you can power the cobbles … push a solid pace on the initial third, stand and power the middle third and then push the final third seated. This formula works well, but is conditional on one important factor, Power. But not just regular power, high-torque, low cadence grinding power. But when this fails, and your brute-power begins to fade, you find yourself pushing an unreasonably low and hard cadence, struggling to keep your speed and actually working harder than when you were going just a bit faster. There is no gutter, no reprieve, just steep cobbles the whole way up the climb, nowhere to hide. Such is the nature of the unrelenting bitch that is the Koppenberg. It was in this power-paradox I was finding myself.

At 11:30pm, mentally done and without any light source after mine stopped working, I called it for the night. I was trying to get to 80 laps before I called it for the night, but each time I came in I had to readjust my goal post. My body, and mind, went on a downward spiral. I decided it was best to rest and hit things hard in the morning. I’d completed only 15 extra laps since my dinner break … I went back home and caught myself a short 4 hours of sleep. 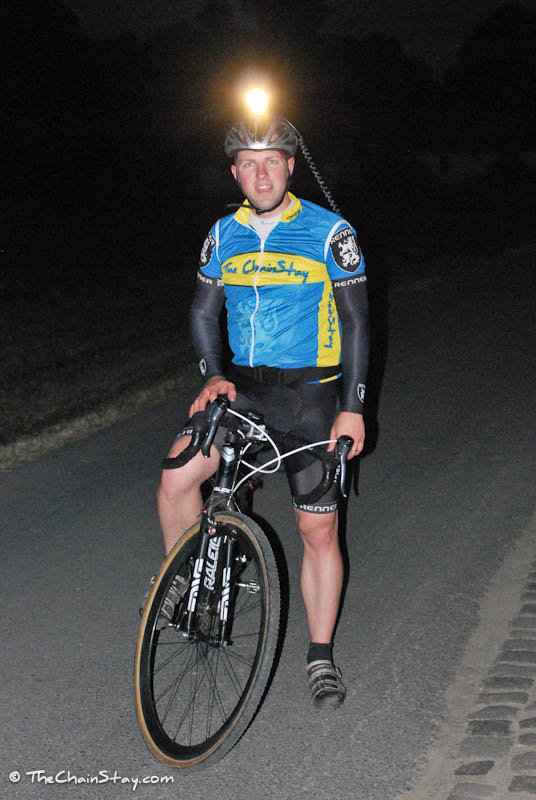 Just before 5am I found myself in a very familiar situation at the base of the Koppenberg; staring at the 550m of cobbled-foe before me. My body was aching, but I was mentally fresh and ready to take on my sisyphean task. I had a readjustment of my initial goal of 125 to 100, the magical triple digits. With just over 7 hours of ride time, this meant I needed just 5 times-an-hour average to reach my goal. A reasonable task and one I set out to take on headstrong with 7 climbs in the first hour.

My body ached with a perpetual dull pain, but I kept going. The next three climbs hurt me; much more than before. Each time I could feel the power start to drain from my legs. Two laps later it happened, I couldn’t sustain the strain and I had to put a foot down. On my 77th time up the Koppenberg I had to walk the steep middle section. My body was beginning to fail, and fail quickly. I was working as hard as I could, but the cobbles just kept pushing back. 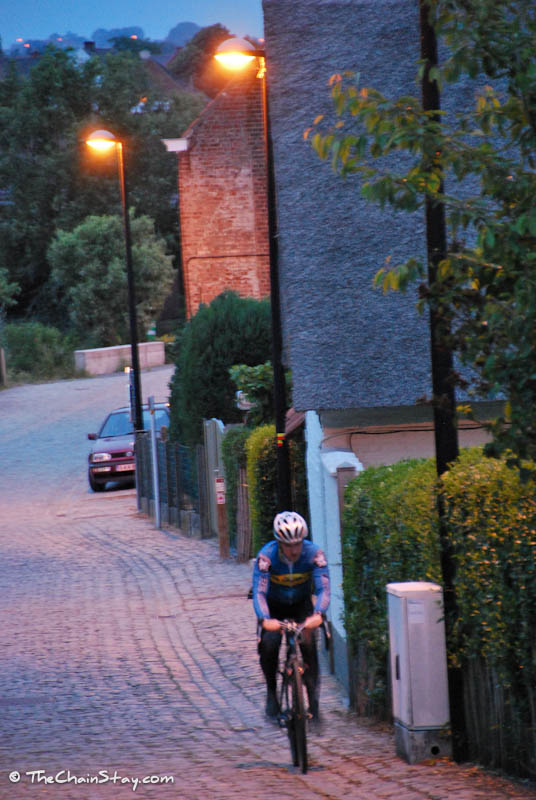 Two laps later I was presented with the worst possible scenario … rain. I knew it was coming, part of the reason I was going so hard at the start of the morning, but when it came, it made things exponentially harder. I tried everything I could to get all the balance, finesse and power out of my legs, but the Koppenberg just pushed back … and hard! Three laps of incredibly slow times, straining to just keep traction and then an increasing pain in my right knee began to take its toll. By the 81st lap I was cracked and with a serious pain in my knee. I sat in the van, staring out into the misting rain and desolate fields of Belgium and willed myself another lap, just one more. I made it one more time up the climb, pushing it all the way, face grimaced in pain, rain soaking my clothes and exhaustion written upon my body. That final climb confirmed that my knee was done, the pain reaching a level well beyond what I knew to be safe to continue.

It was then I decided to call it. It’s not something I was happy doing. I set a goal which I wanted to achieve. I wasn’t racing anyone but myself, but still, it hurt to not reach my personal goal. At 8:40am I stopped.

82 times up the Koppenberg. A number, which as far as my research has found, is the most number of times anyone has ridden the climb in 24 hours. In fact I have found no record of anyone attempting to do 24 hours (or even 12 hours). In all I rode 5904 meters (19,370 feet) of vertical gain over the hardest cobbled climb in Flanders. All of this was over 172 km of riding (107 miles) of which I did 45.1 km (28 miles) of cobbles, all climbing. To put that into perspective I did the equivalent vertical gain of riding Alpe D’Huez 5.25 times but all on cobbles! 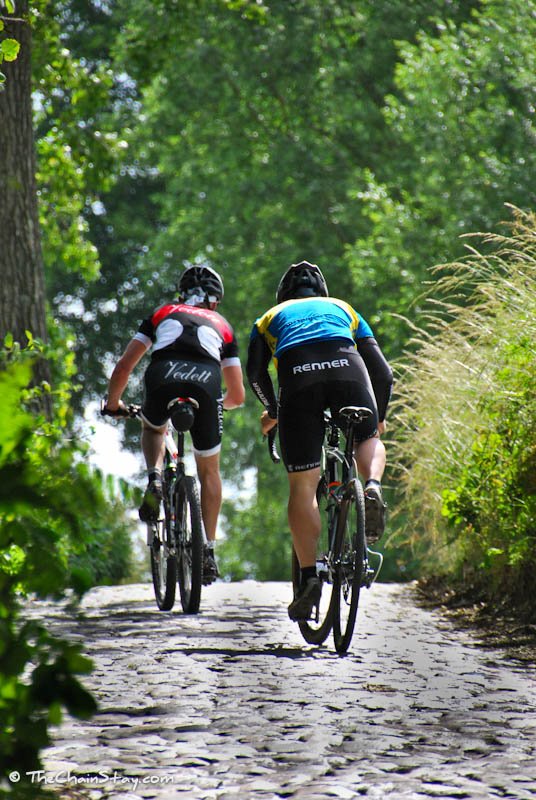 I would like to especially thank my wife Holly and my in-laws, Peter and Debbie for their support during the event. Also, everyone who stopped by during the day and night to cheer me on or ride with me a few times. The company and cheers were greatly appreciated.

Even more I would like to thank all those who donated to the cause. I was able to raise nearly €600 euros for The ChainStay! This will allow us to purchase a few more pairs of extra wheels which will allow us to offer training wheels to our guests, keeping their travel weight lower and expenses down. Also a huge thank you for all of your kind words of encouragement that can via email, twitter and facebook during my undertaking, your words helped more than you will know!