5 years since my last race …

I know this blog post update has been a long time coming, but it’s untimeliness is due to a very good reason. I’ve been busy, very busy. A lot has happened in the last month and a bit, so let me get everyone up to speed on how things have been progressing in the Meatsuit arena.

Probably the biggest news I have is the fact that I have returned to racing again. I knew it was going to be a bit of rough ride, but I decided to give it a go. The thrill of racing, pushing one self against others is a feeling I’ve missed since I stopped at the end of 2007 and I wanted to give it a go again. My original plan was to race on the 17th of May at a local race, but those plans went out the window when I recieved an offer to assist a photographer friend of mine, Kristof Ramon, in the south of France and in Italy at the Giro d’Italia.

Since the dates of the work conflicted with my planned start to racing (combined with the lack of a bike for a week) I decided to move my start date to the 13th of May. I wasn’t sure how it would go, but I just went into the race ready to ride, have some fun and see where the chips fell after the gun went off.

Oordegem’s Kermesse was 22 laps of 4.8km’s, each time featuring a “paved” cobbled climb. I quote paved because these are the “klinkerkoppen” cobbles which are quite small, tightly packed and are not so power draining as the “baby head” cobbles we are so use to seeing. Still, it was a climb and it was cobbled. As the gun went off I found myself riding in the first third of the peloton in just a few hundred meters, sprinting up the side to a safe and well placed position.

That position turned out to one of my race saving moments as I ended up avoiding a crazy multi-person, mid-pack crash only two laps into the race. Reacting off the crash, the peloton went into frenzy mode and drove the pace a couple of notches higher. It was then, just over 15 minutes into the race I thought all was lost, that I would be done for, with my legs aching and my heart rate sky rocketing. I quickly moved into conservative mode, forgoing my long held memories of kermesse-prowess circa 2007 and resigned myself to micro-goals … make it to 30 minutes. 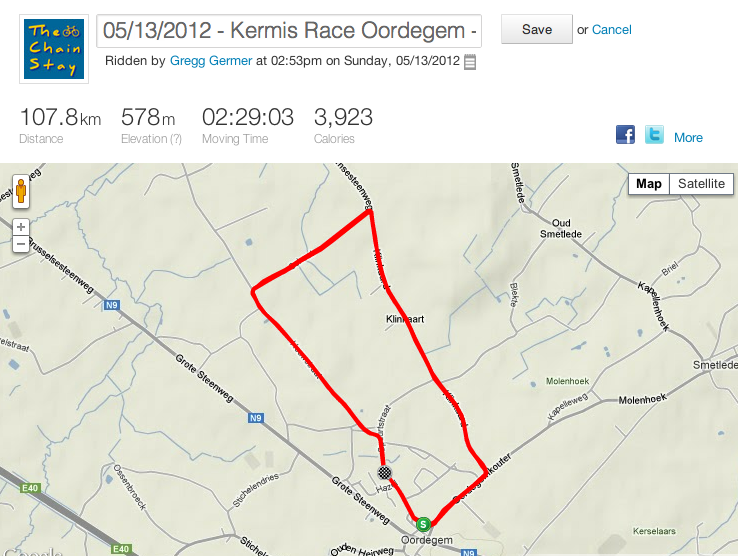 30 minutes came and I felt ok, so I decided to make it to 60 minutes. That would be a respectiable showing and would be in line with my pre-race goals, but then at 60 minutes I was still in the race and feeling good, so it became a goal of 1.5 hours, then 2 hours. At the 2 hour mark I knew I could last the whole race … a thought that I wished but wasn’t sure of it’s reality when I started. I crossed the line in 80-something place, forgoing the sprint due to a very dangerous finish (in which 6 guys went down) and the fact all the top-20 positions were gone up the road. We averaged 43.4km/hr with around  580m of climbing … quite respectable in my books.

5 years after my last pedals turned in anger I crossed a finish line of a Belgian Kermis race after hearing my two favorite Belgian words, Laaste Ronde … Last Lap … Pleased was an understatement, but it wasn’t a shocker. I know racing, I was always a fighter and a scrappy racer. Able to put together great results with little firepower. The race in Oordegem just seemed to let me take advantage of the course when needed and survive the tough bits.

I’ve split this update into two parts (don’t want to bore everyone with a super long post). Check back in the next two days to read about my adventure in France/Italy and my next attempts at turning a pedal in anger after my inital success.