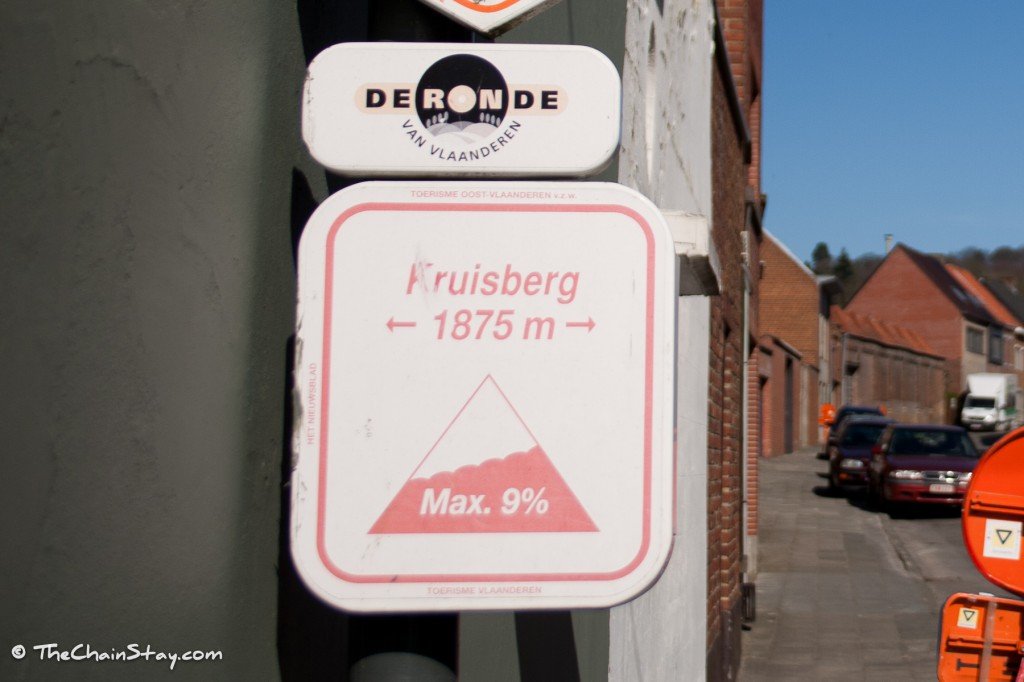 Spring has definitely arrived in Flanders; the sun is shining, birds are chirping, farmers are spraying ‘eau du flandres’ (aka.manuer), and daffodils are everywhere.
This can only mean one thing… it’s time for De Ronde.
And let me tell you, the people of Oudenaarde have caught De Ronde fever big time!  There are shop front displays dedicated to the race, De Ronde wine being sold in all the grocery stores, signs everywhere, cakes fashioned after cobbled climbs, VIP tents already line the course, there’s even a song dedicated to it all! It’s crazy, but of course it’s so cool to see people get this excited for a bike race. So naturally we’ve decided to pick another one of the climbs from this year’s race to highlight this week; climb #12, the Kruisberg. 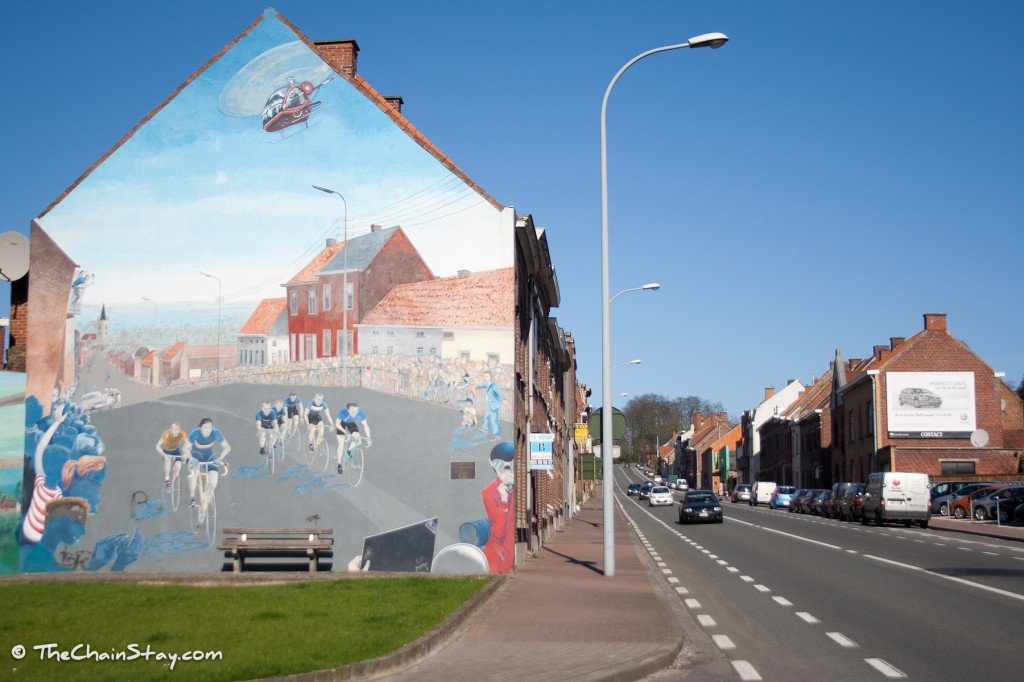 The Kruisberg unlike many of the other climbs is not off the beaten path, in fact it is a fairly major road climbing north out of the city of Ronse towards Oudenaarde and Kluisbergen. The Kruisberg is an asphalt climb of 1875 meters, with an average gradient of 4% and a maximum gradient of 9% –  that’s 90 meters of vertical gain. Though splitting off from the Kruisberg is the Nieuwe Kruisberg, which is both an asphalt and cobbled climb of 1000m and averages a 6% gradient. 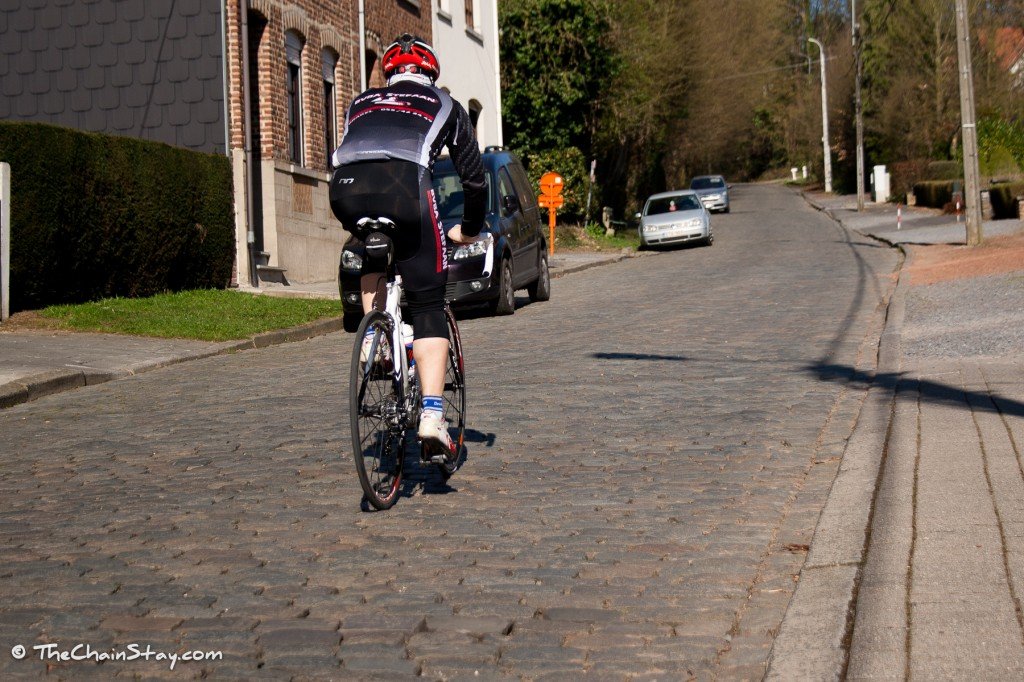 The Kruisberg is not one of the most well known climbs of the Tour of Flanders, it is however one of the longest serving climbs of the race, as it has been included  in the RVV route on and off since 1928. For those of you not doing the math, that means that the Kruisberg has been a recognized climb of the Tour of Flanders for 84 years! It’s partner the Nieuwe Kruisberg has been used in the race several times since 1973. Together the pair have been included in many major races like Omloop Het Nieuwsblad, Kuurne-Brussele-Kuurne, E3 Harelbeke, Nokere Koerse, Gent-Wevelgem, Halle-Ingooigem, and Driedaagse van De Panne. Saving the best for last, the finish line for the 1983 Belgian Championships and the 1988 World Championships stood at the top of the Kruisberg. 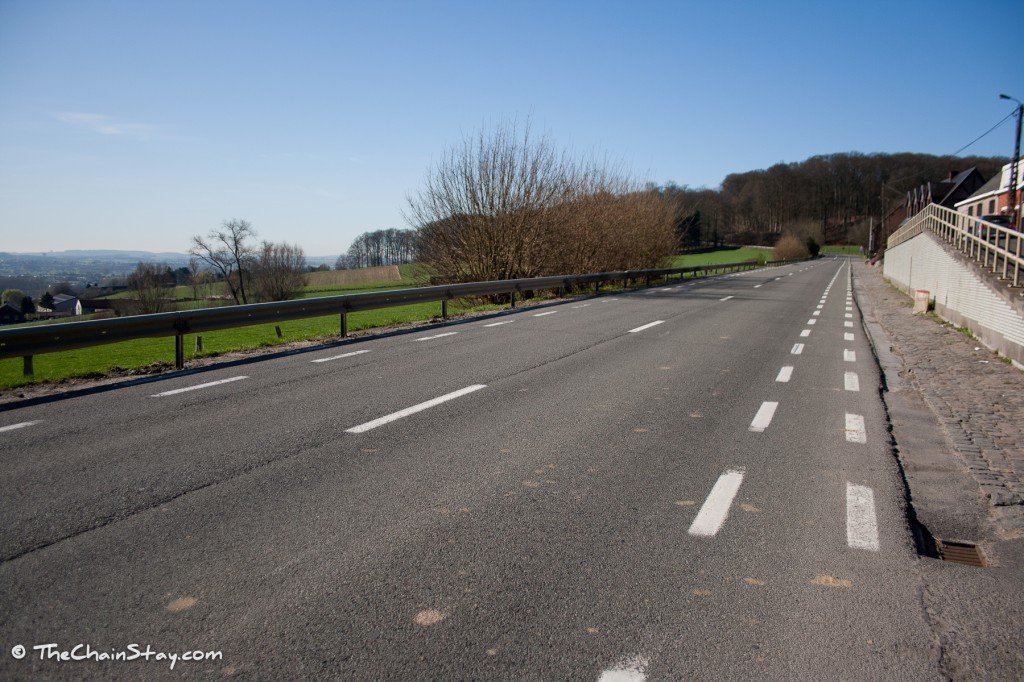 Once at the top of the Kruisberg, take a left turn at the lights and head towards the Hotond… but that’s for another day!

So that’s it for this week’s climb, our final installment before this year’s Ronde Van Vlaanderen (but we will definitely be back with more Monumental Bergs). Who else is excited for the race? Who are your top picks? Any thoughts on E3 Harelbeke or Gent-Wevelgem?
Happy De Ronde week!

For those wondering Gregg has definitely not fallen off the wagon on Project Meatsuit, he’s just been very busy with preparations leading up to the Tour of Flanders and Paris-Roubaix. He will be back very soon with that overdue update from Week #2.