Well the internet decided it was time to get in fluff about this years E3 Prijs Harelbeke’s official poster. And at first glance one can see why?

What I don’t understand is why? Why in 2015 a race that is as visually stunning and at a World Tour level takes the route of going the “controversial” and sexy ad to gain attention of their race? Why? Because it’s working … I hate to admit it, but my Twitter stream has been filled with the ad all day.

I dislike the E3 Harelbeke poster as much as the next person & for that reason would really prefer not to see it in my TL every other tweet.

The real problem is, this is works. Ad sales people know it. The most openly sex sells Superbowl add this year featured Charlotte Mckinney but it was the data after that was most revealing. Adweek reports, “…the campaign has generated a staggering 2.5 billion media impressions in less than two weeks.” and “In other words, the target audience of young males isn’t tiring of the approach.” Let’s face it, the statistics are that more men watch cycling in Belgium than women, but what E3 Prijs is forgetting is they are a World Tour race – WITH A GLOBAL AUDIENCE. If the UCI (and E3) ever wants cycling to move beyond the near total domination of the Belgium market they need to start to have a race that appeals to more than just the small segment of men they are focused on drawing attention from. E3 needs to grow up.

While we are at it, can we please have the Belgian press stop deflating a real issue by throwing out the ‘everything is ok, a woman doesn’t find offense‘ article. Good, one woman doesn’t find this offensive, but a quick peruse of Twitter does find many women, many who are also ardent fans of cycling that find the poster offensive.

I want E3 to keep getting bigger. I think it is one of the most under rated classics because it is proximity to the Tour of Flanders. It could be argued that E3 is nearly as hard or harder than the Tour of Flanders, but we aren’t talk about that, we are talking about the poster, sexism, misogynie and the like. That right there is the proof E3 doesn’t need to stoop to neanderthalic levels to gain attention. Let the race happen and that be the focus of the attention. Yes, you received attention, but was it the RIGHT attention, one that builds your race into something bigger? Short term gains for long term losses.

In fact, when people ask me, I put E3 Harelbeke up next to the Tour of Flanders as my favorite race. Why? Because it is the only World Tour race I ever competed in! So it holds a special place for me. I had a great race and less a stupid mechanical, might have pulled off something cool.

So E3? You want to do something better next year? Call me, I’m more than happy to help for free. And to prove you don’t need to degrade women in photos to gain attention realize that last year I released a photo of my daughter on the cobblestones to help gain publicity for this site. That lead to a book cover, lots of coverage of our website and all without making women in objects, who would of thunked it? 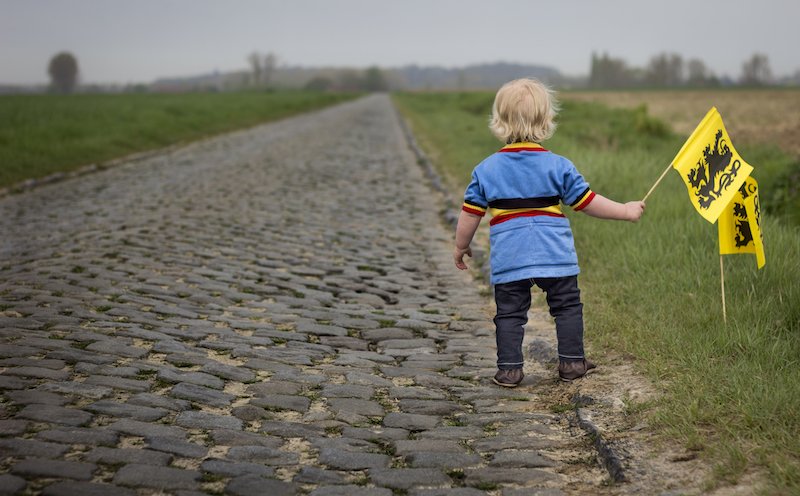