You may have heard of him or you may not have heard of him; but New Zealand’s lone representative to the European ‘cross scene, Alex Revell has become a bit of a fan favourite here in Belgium. Is it because of his soft spoken Kiwi charm? the fact that he’s a long way from home? his now iconic mustache? or perhaps have the crowds picked up on his sheer determination to ride each lap in every cyclocross race as if it is his last lap?
What ever the reason the Belgians seem to love him, and have taken every opportunity to spread his name throughout the Belgian press ( Nieuw-Zeelander: “Rijden me niet in de gracht”, Alexander Revell: de ruige snor in het veld, Nieuw-Zeelander Alex Revell: ‘Met de trein naar de cross’). And for those of you who haven’t yet heard of him, here’s a little Q&A (in English!) with Alex so you can now consider yourself in the know. 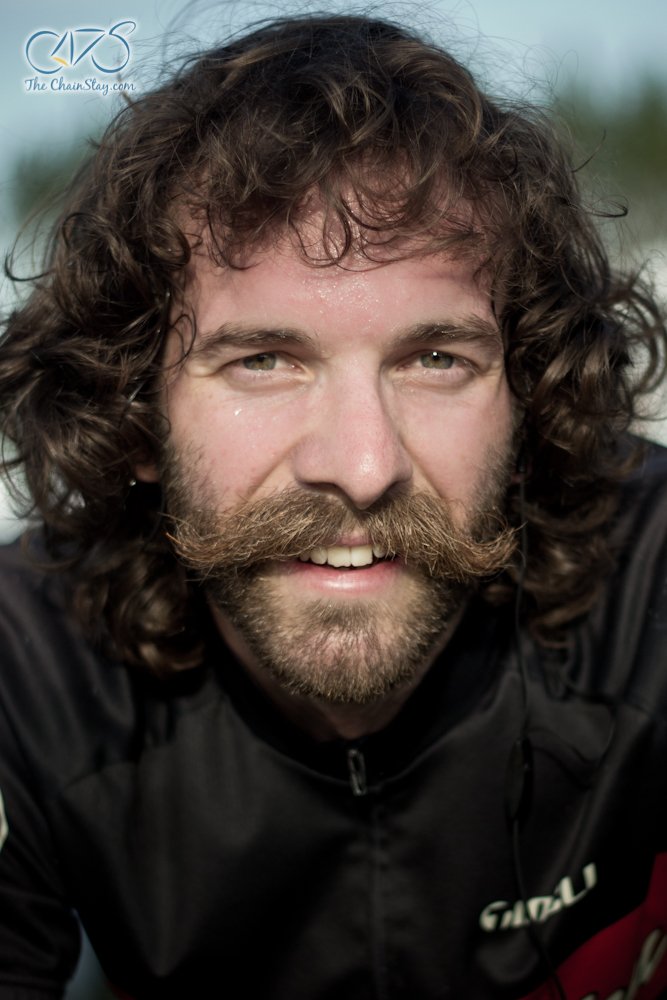 What is your background in cycling?

I always did a little bit of riding growing up, and then as a teenager got into some mountain biking. I also did a little cycle touring with friends. I worked as a cycle courier part time while studying at uni, and after a car hit me and put me out of action I started hanging out at a bike shop, learning from the ground up about mechanical stuff and running a shop. That was in 2008. Eventually i got riding again and through the shop owner i was encouraged to do lots of mountain biking, and started to get more and more bikes as my life headed further in that direction. First MTB, then road, then a singlespeed MTB, then a cross bike…

How did you find your way to cyclocross? and how long have you been racing ‘cross?

So I got a cross bike at the end of 2008, but used it sort of as a compromised mountain bike. Didn’t quite take it everywhere I did my MTB, but almost. It was nicer for going on longer rides with a mix of road and off-road terrain. An American called Mike Anderson came over to Wellington at about that time and set up a bike shop, and organized two cross races in the winter of ’09. They were fun and a novelty to anything else I’d done before – I did a lot of cross country and mountain running as a teenager,
and having since got into cycling I enjoyed the mixture. In 2010 he organized maybe 4 races, then last year he organized 6 races and there was an unofficial national champs in Queenstown.

This year it blossomed around the country, and there were about 6 different series of races in different parts of the country, each with at least 4 rounds. A national series with a round from each of the regions, and a UCI-sanctioned, official national champs (Alex was 2nd). I’d decided to leave at the end of July, which was halfway through the season, so I only got to a few races, but it’s great the way it erupted – and I’m sure it will continue.

Biggest shock of racing in Belgium compared to New Zealand?

Probably the size of the fields and the competitivity, some have had over 70 people in them. In NZ our national champs this year had about 10 people in Elite Men, but there were several reasons for this. It’s still at an early stage so it’s still mainly about participation – the “serious” side of the racing is developing though. Also the cyclocross fans here! They are awesome, and make it just that much easier for me to push myself, with them all cheering.

Which race has been your favourite race in Belgium so far? and least favourite so far?

My favourite was probably Kalmthout at the end of September. The course was very fast and not too difficult, so although I made plenty of costly errors early on, I had a great ride and was much closer to finishing the race than usual. That was on the back of my least favourite day at Neerpelt the day before. It was a great course too, but I found it very challenging and wasn’t very well prepared. At least it gave me reason to reflect on why I’m here and reminded me that every race, good or bad, is great experience for someone as cyclocross-naïve as myself. 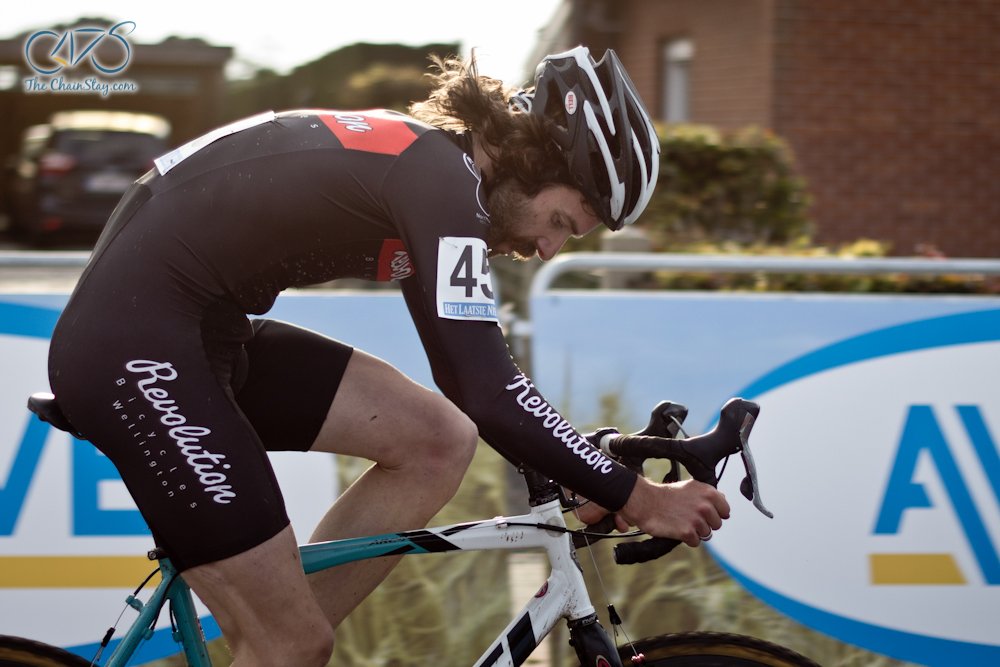 What are your goals for this season? and what are you hoping to take away from your first season in Europe?

My main goal is to finish at least one class-A race on the lead lap. It might not seem like much, but they are so fast and the courses so demanding. Other goals are to compete at the three Belgian World Cups (Koksijde, Namur, and Zolder), Roubaix in France and Hoogerheide in Holland, and the World Champs in Louisville KY.

I wanted more racing than I was able to get in New Zealand, so I came here with the main intent of gaining experience and learning as much as possible about what it takes to race here. If I can improve, and I’m sure I have already, then it will have been worthwhile. I think I’m going to get a lot better.

What can you be found doing when you are not racing or training?

I like reading books, and I’m trying to learn Dutch while I’m here. It’s pretty slow progress though as all the Flemish tend to be near-native English speakers. I’d also like to be playing some music, I have a few instruments at home – piano, guitar, banjo among other things. I am trying to get some money together to buy a guitar here, I found a cheap one the other day so I hope to be able to very soon.

What are your favourite and least favourite things about Belgium?

I love the special treats you can get here – about a million and one different types of waffles, Nutella-derivatives, chocolate muesli, and as long as you put the figure of a woman on it, or write something like “fitness” then it’s all good for you, it seems. The people have been really friendly and welcoming, and the culture and spirit around the racing here is very special, unlike anything I’ve ever experienced.

I have had a fairly tiresome couple of months dealing with the local bank and immigration services, there’s too much disjointed paperwork for everything. You pay to get a temporary document with your photo on it, then pay to get one step closer to an official document, receiving another temporary document with your photo on it while the official document is on its way. Then you get sent a letter saying that your official document will be ready within the next fortnight. But it might take three weeks. Especially if you’re in need of it to find work or move house etc. On top of that their opening hours are irregular and inconvenient for most people’s daily routines, so I have only just got everything sorted for my Belgian long stay ID card and bank account money card. I’ve been here two and a half months!

Tell us about the famous mustache.

It all began last year, as a beard. I’ve never enjoyed shaving. I was in the Air Force for 8 years, so after that I now take almost any opportunity I can to let nature take its course with my hair. As it grew, I enjoyed the way the tips of the moustache section would curl up, so I tried to encourage this. One day earlier this year I accidentally over-trimmed my beard in a misjudged manoeuvre when using some clippers. I evened it all out to a general length of stubble, but didn’t want to loose those curly tips. So when I left them, people suddenly exclaimed “hey you have a moustache!” even though it hadn’t really changed, just emerged somewhat from the surrounding fuzz. It gets in the way eating, but I think it’s too late to lose it now.

Over the past few weeks you have become quite the favourite with the Belgian crowds, what do you think about all the attention that you’ve been getting?

It’s all been quite a comedy really, getting popular because of the hair on my face and coming from the other side of the world. I can understand the novelty for them, as all the other riders here are about as hairy as swimmers, and New Zealand is a long way away, and definitely not famous for its cyclocross riders. I have been flattered by it, and even though some of it has been tongue in cheek – here I am struggling at the back, often being called “Sven” by voices rich in irony – all I can do is try and ride my hardest every race, and I think the people appreciate that. Maybe it makes it seem a little more human, because watching Sven Nys and Niels Albert ride, they make it look like a doddle.

You’ve even managed to get some sponsors lined up through all the publicity, tell us about the new team and the bikes that you’ll be racing for the duration of the season?

I was approached by Los Pedalos a couple of weeks ago. Basically they had read the newspaper articles or seen the photos mounting up on Facebook and one look at the hairy head at the centre of it all was enough for them to know that I would fit in with them. They are a very small team, based in Halle, and they like to have a good time. Some racing, although I’m the only cyclocross rider, but mostly having fun. It’s more of a publicity stunt than anything else, but they are being really helpful to me and I am honoured to have their support. I’m going to be riding Focus Mares CX bikes, with handbuilt wheels and a range of tyres from Dugast and Challenge. I’ve also had quite a few people contact me offering to help with mechanical duties at race days, which has been really great as a solo competitor. So in the last few weeks I went from being by myself with one bike at races to now having at least two bikes and people to help me change when the weather starts to get bad – which is exactly what it is doing! So I am very lucky and thankful for the help.

Thanks to Alex for taking the time to answer our questions, we wish you the best of luck with the season! For anyone who wants to follow along with his progress be sure to like him on Facebook. Also be sure to check out his donation page, all donations help support his season and travels to the U.S, and in a way the future of cyclocross in New Zealand.

2 thoughts on “The Story Behind the Mustache”